Have any questions? Feel free to contact us:
07738957000
info@qualityhearingcare.com
Make an Appointment


Evolution of Hearing Aids – What They Are? And

How Did They Evolve?

Have you ever looked at a Hearing Aid and wondered, “how a tiny device can instantly make the world sound much better?”
Well, it turns out that it was not that tiny after all, until a few years back. This little device has a long history.

The journey of the modern Hearing Aid dates back only a hundred years ago. In the old times, the devices were explicitly made only when someone realized that they were suffering from hearing loss.

Have you ever wondered how did we end up inventing hearing aid in the first place? Let’s dive into the blog to learn its peculiar and rich history.

You can watch this video on how to find the right hearing aid for yourself here:

Hearing Aid and its uses:

A hearing aid is a device designed for a person with hearing loss to improve their hearing health by making sounds audible and clear. This is often classified as medical devices in most of the countries with specific regulations.

The modern hearing aid is a battery-powered electronic device that helps improve your hearing quality. It is small enough to wear inside or behind your ear to hear things clear and loud. A hearing aid consists of 3 items-

Hearing Aid may not help everyone who is suffering from hearing loss. It can only be beneficial for people who suffer from a hearing problem caused due to damage in the middle or inner ear. However, people who have damaged their in-ear canal or have no ear canal sign since birth need to opt for other advanced hearing solutions.

An important thing to understand here is that Hearing Aid does not cure the problem but is a mere solution to improve hearing loss for people with hearing loss. 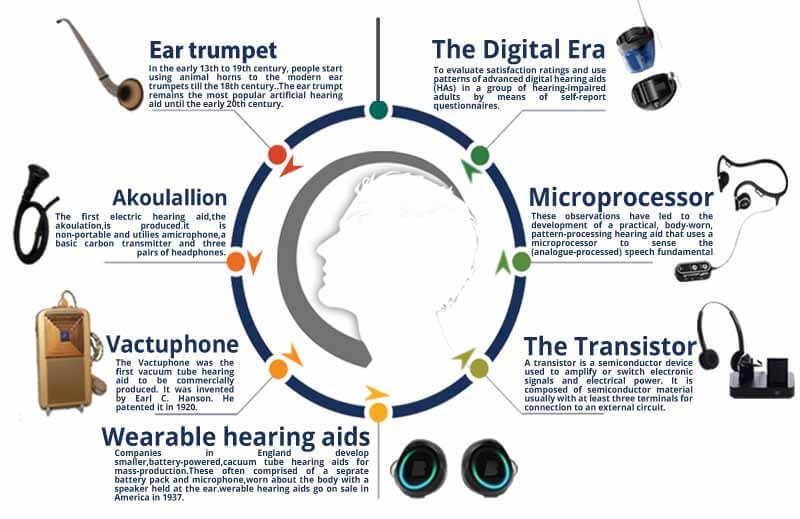 The recorded story of hearing loss goes back hundreds of years ago, and the first hearing solution found by humankind was cupping one’s hand behind their ear. Hearing aids and other assistive listening devices have come a long way since the first rudimentary attempts at improving hearing.

People with hearing loss have used hollowed animal horns from cows and big-horned sheep as primitive hearing devices since the early 13th century.

A funnel-shaped design, ear trumpets were man’s first attempt at inventing a hearing loss device. It came into existence in the 18th century. Unlike modern Hearing AIds, it didn’t amplify the sound, but it gathered and “funneled” it through a narrow tube into the ear.

Bulky and funny looking ear trumpets are the subsequent speaking tubes that failed to give optimum results in treating the issue until electricity. The telephone was invented in the 19th century. Modern Electronic Hearing Aids came into existence thanks to Graham Bell’s magical invention known as the telephone. When the phone was invented, people realized that they could hear better with the receiver near their eardrum.

The invention of the telephone was combined with the practical application of electricity in the 19th century to make a tremendous impact on hearing aids and other assistive hearing devices. People with hearing loss quickly realized that they could hear a conversation better through the telephone receiver as it is held up to their ear.

However, Thomas Edison, who experienced hearing loss firsthand, saw room for improvement. He invented a carbon transmitter for the telephone in 1987, which amplified the electrical signal and increased the decibel level by about 15 decibels (dB).

An amplification of about 30 dB is usually required to allow those with hearing loss to hear better. The invention of the carbon transmitter for the telephone indeed paved the way for the technology to be used for carbon hearing aid eventually.

Carbon hearing aids were in use in 1902 even though it was not ideal due to their limited frequency range and tendency to produce scratchy sound, until the advent of the next wave of technology: vacuum tube hearing aids. 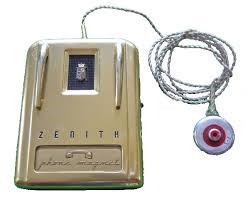 At the beginning of the 1920s, using vacuum tubes increased the sound level to 70 dB for hearing aids. It was because vacuum tubes controlled the flow of electricity better than carbon.

But the problem was its size, which in the beginning was as large as the size of a filing cabinet, making it challenging to be portable.

By 1924, the size of vacuum tube hearing hardware was reduced to fit all of the small wooden box components, with a receiver that the user held up to the ear. Despite this improvement, they were still cumbersome, bulky, and conspicuous. They amplified all types of sound, not just the sounds the user wanted to hear.

The technology was improved in 1938 when Aurex introduced the first truly wearable hearing aids, consisting of an earpiece, wire, and receiver. It can be clipped to the user’s clothing. The catch was that this model also required a battery pack that the user had to strap to their leg.

In the late 1940s, thanks to the technology developed during World War II, we finally saw the production of hearing aids having circuit boards and button-sized batteries, allowing the batteries, amplifier, and microphone to be combined into a single portable, pocket-sized unit.

They were marketed as discreet, through the pocket unit connected to individual earpieces with wires that made them less appealing.

Despite all the advanced technology, the world still was waiting for small, one-piece hearing aids that could fit entirely in the ear and be worn discreetly. Thankfully, they didn’t have to wait long for this. 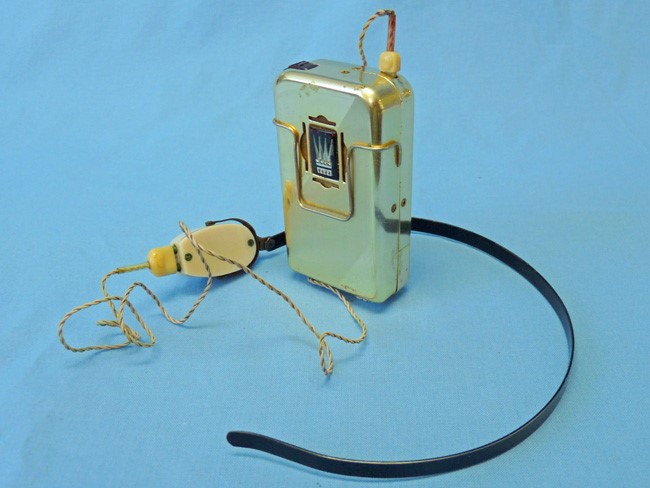 In 1948, Bell Telephone Laboratories invented the transistor that started the journey of small and discreet hearing aids.

A transistor is a switch that controls the movement of electrons. It can start and stop the flow of current and also control the volume, making it possible to have multiple settings in one device.

By 1952, Krim could create junction transistors for hearing aid companies. The transistor technology enabled the makers to create smaller hearing aids that fit in the ear entirely.

Capitalizing on the new technology, one of the first hearing aids to be worn almost entirely inside the ear was invented in the late 1950s by Ontario Electronics. It was called the Ontario Listener, and the electronics were embedded in the temple pieces of eyeglasses. These “hearing glasses” got famous, and new versions of this innovative technology were introduced by other companies such as Beltone and Sonotone.

The introduction of the digitally enabled Hearing Aids was a breakthrough in the Tech world. Eventually, hearing aid manufacturers were able to develop transistors out of silicon, enabling hearing aids to shrink even further.

The Hearing aid technology, which we know today, was introduced by Zenith Radio in the 1960s. The microphone of the hearing aid went in the ear. A small wire connected the microphone to an amplifier. The battery unit was clipped to the ear in this version.

This technology remained the same until the 1980s, until the introduction of digital signal processing chips to hearing aids. Finally, the first fully digital hearing aid model was introduced in 1996, where we used a hybrid digital-analog model (an analog compression amplifier controlled by digital circuits).

By the year 2000, hearing aids could be individually programmed, allowing user customization, flexibility, and fine-tuning, and by 2005, digital hearing aids represented about 80 percent of the hearing aid market.

Digital technology in Hearing Aid is the same circuitry that is used in cell phones and computers.

Hearing aids can be fine-tuned by a hearing care professional and customized to an individual’s hearing needs today. They can also adapt to different listening environments and be connected to other high-tech devices such as computers, televisions, and phones. They come with features such as telecoils, Bluetooth, and FM connectivity to allow compatibility with other electronic devices.

Honestly, we have come a long way from the ear trumpets to tiny ear aid pieces. Hearing aids continue to evolve as technology advances with time. We have genuinely rechargeable hearing aid batteries in the market today.

Many hearing aids are also becoming “smart” to adapt to different listening situations without any user intervention.

Long-wearing hearing aids have been available, which can stay in the wearer’s ear canals for several years.

Looking into the future, we believe that hearing aids will continue to evolve beyond imagination with improved performance for a better life.

To understand more about the customized hearing aid solutions, please contact us at www.qualityhearingcare.com.

How Do Hearing Aids Work? 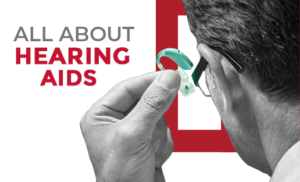 The Ultimate Hearing Aid Guide you will ever need

Looking For The Best Hearing Aids Is Not Easy